Our speakers among others

Ertl Pál
CEO, Chairman of the Board
QUANTIS Holding Zrt.

Why you should come?

Download the Portfolio Events mobile app where you can find Portfolio’s professional events in one app, personalised for you. You can access the event’s detailed programme, the list of participants, and your conference ticket, among other things. We even offer a virtual business card exchange. How? The QR code on the badge is your personalised online business card - scan each other's QR codes and you can keep in touch after the conference. Profession, experience, networking. Install with QR-code from desktop >> PARKING: Free in the Buda Castle, if you go to the Hilton to conference. (In the Gates push the 'Hilton Guest' buttom.)

EVERYONE WHO COUNTS WILL BE THERE!
The Portfolio.hu conferences are highly renowned for their great opportunities of networking and building business relationships, merely not just giving new professional knowledge. Our aim is not to have a one time occasion event, but creating a yearly international interactive forum about the changes of the market.


SOME SPEAKERS’ SENTENCES ABOUT TOPICS:

"Last year the “Golden era" ended - after ten years of continuous growth, in 2008 the revenues of the insurance industry slightly decreased. In the upcoming period we expect a major market rearrangement, depending on who can find what solutions to manage the impacts of the financial crisis. We must adapt to the changed situation! In the next few years the demands could probably increase for the classical insurance products - with the aim of mitigating the negative impacts of the crisis. The demands for risk insurance (life and property) will rise, which could partly offset the dramatic drop in investment type life insurance. However, the financial crisis also presents an opportunity: a chance for renewal, for recomposition, to implement the actions that we were hesitant to take during the time of growth. That is why I believe that after a period of consolidation - probably two or three years - we can expect our industry to start growing once again, since Hungary is still an underinsured country."

"Innovation, creativity and the quick and flexible reaction to market conditions are presently gaining added value in the various business lines, as well as in the sales channels. This must be matched up by product innovation resulting in products on the market which satisfy actual client needs and are clearly understood by the clients. In 2010 a lot of decisions will be tested, we will see what strategies are applied to this economic situation, and which of the strategies have proven successful. I believe that the strategy of diversification, and improvement on cost effectiveness, as well as the streamlining of processes can ensure further growth."

Miklós Zsoldos, Chief Executive Officer and Chairman of the Board, UNION Biztosító

"We have had a turbulent period behind us: at the end of 2008, after a long and prosperous, calculable period of growth, financial institutions and their clients were suddenly hit by the rapid changes of markets, and in many cases inventors faced painful losses. The job of financial advisors became more challenging, due to the fact that the fallback of financial and capital markets made a lot of people who trusted in savings insecure. Unequivocally, this left its mark on the sales results.
It is the duty and common interest of the entire financial sector to restore the shaken confidence. We should reconsider our client service strategies, and reform the product offering according to customer needs, responding to the current economic environment, and place the sales agreements on new platforms. The role and responsibility of sales agents regarding client relations needs to be redefined, in a way that supports the customer in making conscious and responsible financial decisions. If the management of insurance companies take these steps, 2010 can become the year of a new upswing. But are we brave enough? What do we think about future? Which is the winning strategy?"
János Bartók, Chairman and CEO of Aviva Life Insurance Co.

"In my opinion, at legislative level it should have been enough to regulate certain fundamental elements of motorist third party liability insurance, namely fundamental rights and obligations and the most important rules of guarantee. And the detailed regulations should have been created by with a much more flexible approach to legislation. For example, it should have been important to develop the bonus-malus system before the creation of the rules on loss history records, but the negotiations are still in progress about the former. With the anniversary we now see the implementation of a proposal supported by the majority of the professional community, i.e. the anniversary of the contract will be the inception date. This will gradually relax the workload imposed on the insurers by the end of each year and at the beginning of the new year through the high number of contract changes, and the contracting parties will have no problem in obtaining the documents related to their new contracts. This change will not restrict competition, rather “spread" it over the entire year."

"According to all market surveys: the local people want to by life insurance. The thing is in fact that they do not know that therefore we have to inform them regarding their possibilities meeting their needs. However not only because of the potential increase of the demand but for example due the constantly changing laws there is a big space in the Hungarian market."

"50 years of the Hungarian MTPL system, - peaks and gaps in the past, searching for new directions in the present."
"All stakeholders of the MTPL system will find pros and cons in the new regulation."

"At Allianz the primary aim is the development of such a simple and transparent organizational structure, that is suitable for the fulfillment of the tasks of efficient operation and organization control in the changed market environment, while reducing the relevant costs of the company. We have developed a new organizational structure, which is aimed at the creation of an integrated, multi-channel sales organization, in which the former national network organized according to the territorial principle will be replaced by customer and sales oriented central control. That way, now in addition to the traditional network of sales representatives, the bankassurance branch offices developed together with Allianz Bank, on-line sales focused Allianz Direct, the brokers and the multi-agents will have to work in the same system. We do not give preference to any of the channels, rather integrate them, in order to increase efficiency."

"The non-life insurances will be in short, middle and long term also successful. This can be negatively influenced by the fierce and forced competition concerning the premium and growth. However we have to learn from the mistakes of the others."

Pál Ertl, Members of the Board, UNIQA

"In order to accelerate sales first of all higher (potential) value customers should be acquired. Then this value potential is to be realised through developing and cross-selling customer need based, tailored value propositions. Finally servicing, loyalty building and retention should become focused on higher value customers. To make all these happen well executed processes, motivated employees, a customer focused organisation are needed supported by a proper IT system."


Some pictures about the Portfolio.hu - Penzcentrum.hu 3rd Insurance Conference 2009:
Registration 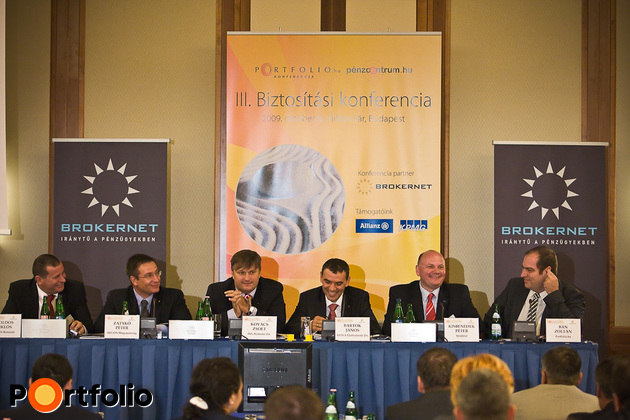