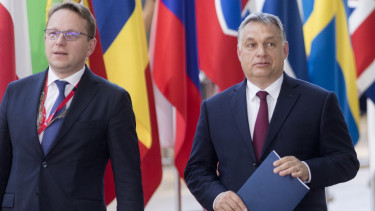 Trócsányi was supposed to take the prized Neighbourhood and Enlargement portfolio

Várhelyi will now face the European Parliament's confirmation process, which includes an examination of their financial affairs by the Legal Affairs Committee and at least one confirmation hearing from a specialist committee.

Although Várhelyi is expected to be earmarked to take responsibility for EU enlargement and relations with the bloc's neighbors, the paper said it is not a done deal yet. According to sources close to UVL, the remaining posts will be distributed only when Romania finds a new prospective candidate, after the rejection of ex-minister Rovana Plumb over her past financial declarations, which revealed discrepancies about private donations.

Von der Leyen and her team are urging all the key political players in Romania to put forward a new candidate swiftly.

The "Romanian government was asked again (with the Romanian President in copy) to nominate a candidate as soon as possible," Politico cited the transition team spokesperson as saying.

The spokesperson specified the nominee should not be someone from "an earlier selection process nor rejected by the Parliament."

Várhelyi is Hungary's current ambassador to the EU. Diplomats as well as current and former Hungarian officials described Várhelyi, a career diplomat and former Commission official, as highly intelligent and extremely knowledgeable on EU issues. But multiple former Hungarian officials also describe an abrasive leadership style that has included screaming, yelling and swearing at staffers. Várhelyi has declined to comment on those allegations.