Hungarian
The proposal made by the outgoing European Commission on the next budget of the European Union is unjust, and "we want justice", said Hungary's Prime Minister Viktor Orbán in Prague on Tuesday. 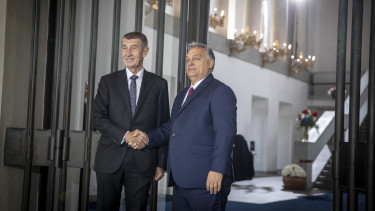 Orbán is attending a summit of the Group of Friends of Cohesion, an event agreed upon by the premiers of the Visegrad Four countries (V4, the Czech Republic, Hungary, Poland, and Slovakia) in early 2019. Following a V4 meeting, Orbán underlined that the plan being discussed all over Europe, the proposal of the outgoing European Commission reflects all the mistakes of the EU executive.

The Hungarian PM remarked about the enlargement of the EU that they are all disappointed with the delay in accession talks with North Macedonia and Albania. He urged to accelerate negotiations with countries that are already involved in consultations in a bid to mitigate the impact of such a bad decision.

The European Commission proposes a long-term budget equivalent to 1.0% of the EU's gross national income (GNI), versus 1.11% proposed earlier.

The Czech Premier underlined that the goal of cohesion policy is to gradually balance out the differences between the standard of living in western and eastern member states. "The reduction is unacceptable. At the same time, it needs to be given priority to spend EU funds sensibly. We need to be given the opportunity to decide on investments ourselves, on a national level," Babis stated.

(Cover photo: Andrej Babis Czech Prime Minister receives his Hungarian counterpart Viktor Orbán ahead of a prime ministerial meeting at a summit of the Group of Friends of Cohesion in Prague on 5 November 2019. MTI/Prime Minister's Press Office/Zoltán Fischer)