“It will be more than just a bump” says Commerzbank analyst

Hungarian
The world economy is in for a bumpy ride, as the keynote speaker at Portfolio’s “Finance Summit 2019” conference pointed out, speaking primarily from the perspective of the German and Chinese economies. 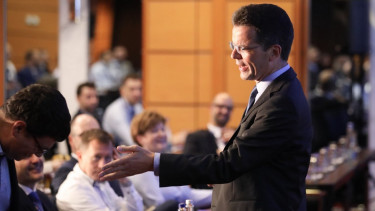 Commerzbank Deputy Chief Analyst Ralph Solveen spoke, among other things, of the following:

The Purchasing Managers’ Index (PMI) in the manufacturing industry is showing downward trends with US economic outlooks starting to worsen 8 to 9 months later due the “Donald shift” than those of the eurozone or emerging economies.

The automotive industry is going through a slowdown almost universally, showing signs of a slump in India and China in particular and indicating some growth in Brazil and, to a minimum extent, Japan, among large markets, based on the first seven months’ data on a year-on-year basis.

The car industry has its own sector-specific problems, but these alone do not explain the downtrend. The global economy is past an 8-10 year growth cycle with fundamental economic events.

The trade war is not the only factor that can give rise to concerns over China. In recent years, the Chinese government has taken braking measures resulting in halting and turning around the growth (of nearly 200%) in household and corporate debt relative to the GDP. This translates into lower demand at the aggregate level.

China has realised the need to adjust to Trumpian economics and has so, for example, lowered taxes and banks’ reserve requirements, but all this, offset by the trade war, is not enough to give a powerful boost to Western exports directed here, unlike in previous cycles.

Germany’s potential GDP growth rate stands at around 1% and growth in the eurozone is not much higher either. The fall in German manufacturing industry activity is more significant than during earlier slowdowns but, for the time being, is not as great as it was 1991-1993 and 2008-2009.

The services sector closely follows the manufacturing industry in turning downwards, raising the threat of a quarterly bust in Germany.

The months to come may see a general trend of expansionary monetary policies with major central banks focusing on interest rate cuts and money-printing amid a looming slowdown. Bond yield trends may have a stabilising effect on stock markets.